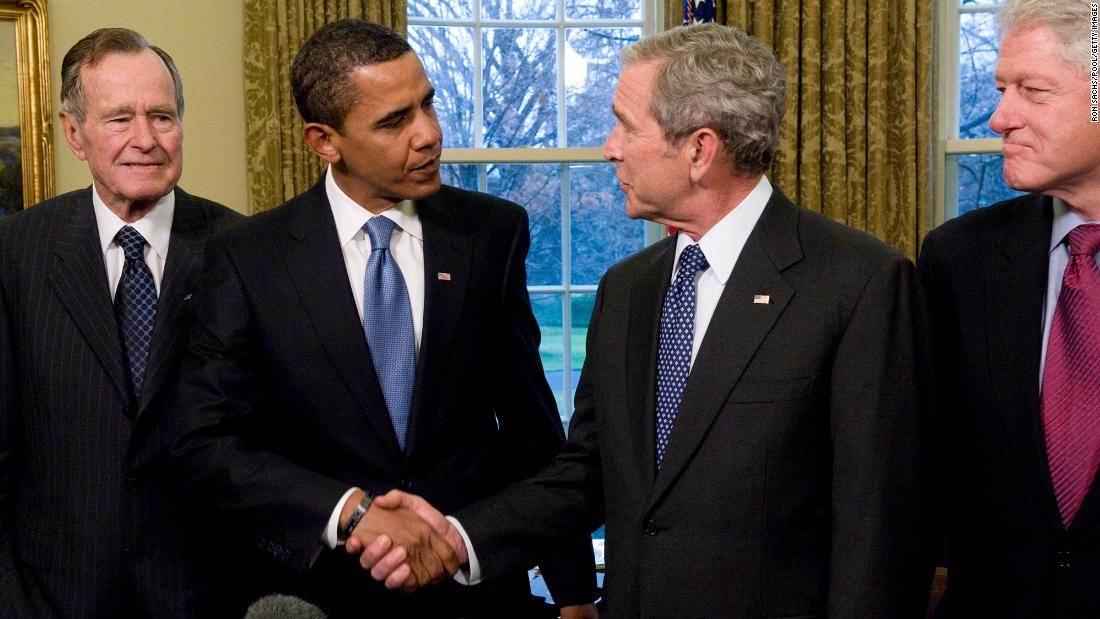 This precarious backdrop raises the stakes for a smooth transition from one president to the next.Federal Reserve Chairman Powell, who was named by Trump, is among those calling for Congress to provide more fiscal stimulus.Bush worried about auto collapseBy contrast, the 2008 Bush-Obama transition is viewed as the model -- even though Obama campaigned aggressively against Bush's record.GM GM Obama eventually decided to provide enough taxpayer funds to save bothand Chrysler.Greg Valliere, chief US policy strategist at AGF Investments, warned of a "very acrimonious transition" between Trump and Biden.

New York (CNN Business) When Joe Biden is sworn in as America’s 46th president, he will immediately inherit twin health and economic crises. This precarious backdrop raises the stakes for a smooth transition from one president to the next.

There is a precedent for political rivals teaming up during a crisis.

In December 2008, Republican President George W. Bush approved a $17.4 billion rescue of GM and Chrysler because he didn’t want the auto industry to collapse before Barack Obama was sworn in.

“I feel an obligation to my successor,” Bush said at the time. “I believe that good policy is not to dump him a major catastrophe in his first day of office.”

Flash forward to today. Economists broadly agree that despite the significant progress on a coronavirus vaccine , the US economy badly needs more fiscal relief. Federal Reserve Chairman Powell, who was named by Trump, is among those calling for Congress to provide more fiscal stimulus.

President Donald Trump could help millions of Americans by securing a major economic stimulus package that prevents a wave of layoffs and bankruptcies before Biden takes office.

Unfortunately, this transition is shaping up to be the most turbulent in modern times, casting doubt on the prospects for a badly-needed stimulus package and coordination on the national response to the pandemic.

“2008 is a good example of how this is supposed to work,” said Eric Winograd, senior economist at Alliance Bernstein, now known as AB. “It’s clear that isn’t the pattern we are going to follow this time around.”

Failure to provide more fiscal relief could backfire because the pandemic is getting worse . With coronavirus infections spiking, states and cities are imposing new health restrictions that will only add to the pain facing restaurants, movie theaters, retailers and small businesses. That’s not to mention a continued reluctance by many Americans to hop on a plane, stay in a hotel or go anywhere crowds might be.

Trump has not conceded the race, nor recognized the election as legitimate. There are no plans to invite Biden to the White House, a longtime tradition, including when Trump met with Obama two days after the 2016 election.

“There is wide agreement that stimulus needs to be done,” said Winograd. “But if people aren’t cooperating on the basics, it becomes difficult to see how they can cooperate on stimulus.”

By contrast, the 2008 Bush-Obama transition is viewed as the model – even though Obama campaigned aggressively against Bush’s record. Still, Bush was determined to avoid repeating the mistakes that slowed the early days of his administration, which got a late start because of the 2000 recount.

In Obama’s first private meeting with Bush, he pushed the outgoing president for help with the auto industry. The Bush and Obama teams later met at the Treasury Department to game out options to provide aid to the auto industry.

Presidents George W. Bush and Barack Obama have been credited with a near-flawless transition that included providing loans to keep GM and Chrysler afloat during the Great Recession. The two met in January 2009 before Obama took office along with President Bill Clinton and Bush’s father, President George H. W. Bush.

But that December, Senate Republicans rejected a bailout of the auto industry. With financial markets frozen and the Great Recession underway, GM and Chrysler were on the brink of a bankruptcy and possibly liquidation that would have wiped out millions of jobs and decimated the auto suppliers. Even rival Ford was begging for immediate government help to save GM and Chrysler.

Even though the auto bailout went against Bush’s free-market instincts, he eventually approved using TARP funds to keep GM and Chrysler afloat.

“I am worried about a disorderly bankruptcy and what it would do to the psychology and the markets,” Bush said at the time.

Steven Rattner, the Wall Street banker who led the Obama administration’s auto rescue, praised the move in his 2010 book “Overhaul.”

“The loans bought time, not just until January 20, inauguration day, but until at least March 31, giving us a little breathing room,” Rattner wrote in the book.

However, allowing GM and Chrysler to fail would have been far costlier because of lost tax revenues and unemployment assistance, according to a study by the Center for Automotive Research, a Michigan think tank. A total meltdown would have cost the federal government between $39 billion and $105 billion, the think tank has estimated.

“It’s very clear that bailout was successful,” said AB’s Winograd. “It preserved an industry that is a large employer and has significant knock-on effects to the broader economy.”

Stephen Moore, an economic adviser to Trump, sees little chance of Trump backing a major stimulus package – even though the president championed a $2 trillion deal before the election.

Moore, who said he hasn’t spoken to Trump since the election, pointed to the strong October jobs report as evidence that the United States doesn’t need a costly stimulus package.

“I would say, “Mr. President, you don’t want your last act as president to be signing a $2 trillion debt bill. That’s going to be a stain on your record,'” said Moore, who added “we’re not giving up” on the election yet.

And in any case, economists say the focus should be on reviving the economy, not fixing the budget.

“The US federal budget is on an unsustainable path, has been for some time,” Powell, the Fed chief, said during a recent speech . “This is not the time to give priority to those concerns.”

Moore said Trump could go along with a “fairly pared down” stimulus package that provides unemployment and small business funds, but no aid to state and local governments ravaged by the pandemic.

Greg Valliere, chief US policy strategist at AGF Investments, warned of a “very acrimonious transition” between Trump and Biden.